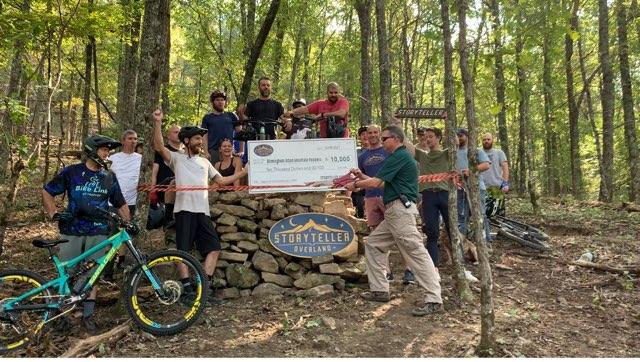 Storyteller was initially planned to be cut at the same time as Thunder. Thunder as it exists now was meant to be the easier of 2 options down the mountain. The rumors circulating at the time were that only a few people would be able to ride the hard line down the mountain. Due to the cost and difficulty of the build the second line was dropped at the time and fell off the radar for several years. However, the dream was kept alive by a few people who saw how special it could be.

In February of 2021 we reflagged and resubmitted the second line for approval to the state park. Approval to move forward was granted July 2nd , and on the morning of July 17th we hit the trail at 730 am and began cutting our new trail. Over the summer numerous volunteers came out to lend a hand digging, moving rocks, and clearing brush. On October 9th, after several hundred volunteer hours and about 30 yellow jacket stings later the trail was completed. The final product is roughly 1 mile long with about 500 ft of elevation drop. This trail is the only big mountain down hill trail in the state of Alabama with numerous steep rolls, mandatory drops, and tons of off camber sections.

Storyteller Overland is a Birmingham based manufacturer of overlanding adventure vans. They have been sponsors of past Bump N Grind races, and great supporters of the BUMP mission. In their quest to promote community and the spirit of adventure, Storyteller Overland has donated generously to help us continue our work in the Birmingham mountain biking community. We are incredibly appreciative of their support and believe the name “Storyteller” is a perfect match for our new trail at Oak Mountain State Park.